This website is the offshoot of a Facebook group called I Might Have Drank at French’s Tavern, established in March 2015. From the mid ’60s to the late ’80s, French’s was a live music venue on Oxford St, Darlinghurst, home to a conga line of musical styles: jazz, blues, R&B, folk rock, hard rock, hardcore and punk.

All the while it kept its own character, different to other places: maybe a bit more intense because of the small capacity, the closeness of bands and audience, the literally underground feel when the music moved downstairs in the 70s. It was one of the few places where the tribes mixed freely, mostly without serious incident.

French’s gave early exposure to some of our most popular and enduring acts: Cold Chisel, Midnight Oil, Paul Kelly, INXS, The Triffids, The Reels, Radio Birdman, Mi-Sex, The Birthday Party and more. For the Foreday Riders, it was home base for many years. It gave Ol’ 55 their first gigs. Richard Clapton honed a new album there.

And then there were the less widely known bands: feedtime, Sweet Poison, Lubricated Goat, Box the Jesuit, The Exploding White Mice, The Slugfuckers, Real Fucking Idiots, Smack of Jellyfish, Thug and over 200 more.

Thanks for coming. Enjoy the show. 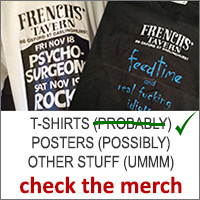