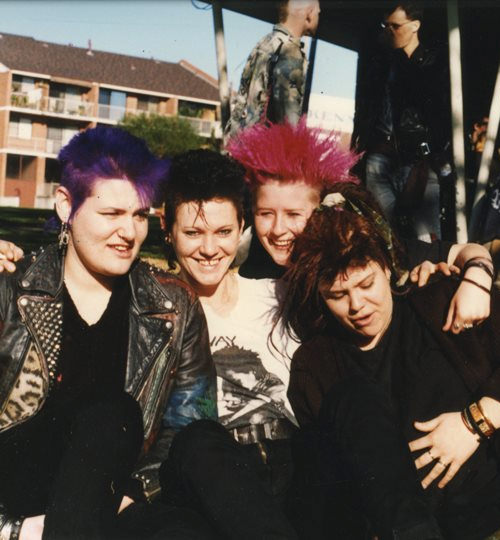 JD: Anyone remember one of the punters during the eighties hey day of French’s a tall tuff lady called Roz! She was a gem of a person! Roz if you see this post … thanks from an ol drinking buddy and punter! Another one was Glynn – he was a cosmic fellow! you are a gem too!

TW: I knew Roz (if it was tall tatttoed Roz) very well, haven’t seen her for years, she was a diamond for sure

JD: Yep she’s the one! a beautiful soul had a secret crush on her! The last I saw of her was around the early 90’s.

TW: i knew roz from back in the 80s, early on, messy times for a lot of us, i have no idea where she is now and haven’t seen her since i don’t know when but i hope she’s doing fine

LP: I knew a tall tough tattooed lady called Roz, she was a barmaid at the Union in Newtown around the early 90s

JD: That could be her…short hair?

LP: short dark hair, a bit of a spikey punk cut from memory

TW: the Roz i knew wasn’t a barmaid

LF: I posted a photo of Roz in sydney punks and skins group some time ago. I’m still in contact with Fiona but don’t know what became of Roz. I was told by an unreliable source that she was dead … May not be the same Roz so don’t panic!

TW: she was a great gal if u knew her well, i knew her from all sorts of seedy places and i’m not just talking dives, it wdn’t surprise me if she were dead but i shall talk to some old mates in sydney and ascertain the truth, or otherwise, of that particular rumour

TW: Yes, definitely my mate Roz – she’s on the inside sleeve of Suction by feedtime too – i loved Roz

LF: She was always sweet to me… Fiona was my mate back then too… Visited Roz in the suicide block in redfern, fuck they were grim…

TW: i lived across the road from the McKell – should be MacHell – in the inaptly names Poets Corner blocks – Roz was my good mate for years

GS: Roz was the drummer in Headboy!

CS: Roz is definitely a gem and on FB but can’t seem to tag her will let her know to come on the group