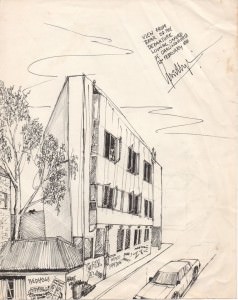 PM: So while not strictly French’s it’s just next door. I drew this on the back of a script while waiting at the back door of the Departure Lounge for a Crispy Bacon rehearsal .. a metre from the back door of French’s.

BL: I’m not sure I went to frenchs. I went to departure lounge when I was a schoolgirl so probably not but the legend of frenchs continues on. RIP Jackie Orczsacky

SB: I had the Departure Lounge next door to French’s & I had to drill the teaspoons so the junkies wouldn’t hit up. There was the night …. that I dragged out a junkie & just tipped him down Crown Street (which is quite steep !) But … Frenchs was there before me , so I always respected that … Tom is so much more informative about our days, I’m lame on all that, he had to even remind me Nick Cave played downstairs at our cafe …

All I remember is there was no insulation, so band wars! Conflicting raaaar. Heavy place French’s, it was the dark side of the street in the early 80s & I started a cafe … right next door. 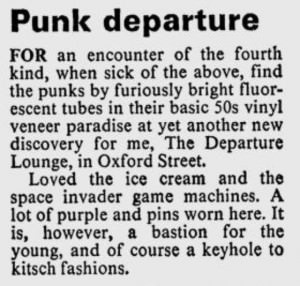 RW: I loved your cafe – still think of it sometimes.

WJ: i loved the Departure Lounge too

SB: Ye’all might remember it , but gees I had NO idea ! I’d be lambasted these days .. Beyond .. Leo Scofield reviewed my cafe saying “bad food” I had to have a security guard to keep peeps out.

KR: DL blazed the way before many pale imitations existed and was vital at the time. A counterpoint rather than a contradiction to Frenches. 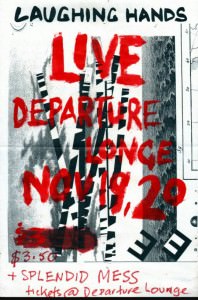 PM: Spoons had to be drilled at Franco’s Cafe too … probably nicked the idea from you Susan. I must say that cleaning the loos at Franco’s at the end of a shift … closing time was 1am … was an education for a boy from the suburbs

CM: I had coffee with members of Kraftwerk at the Departure Lounge! They had Lonesome Train on the jukebox.

MP: I remember the Departure Lounge, very hip and had great furnishings and decor.

GZ: how fucking cool was the Depature Lounge they used to teach rockabilly dancing with this original teddy boy from England always used to see him at the Lansdowne …

PM: When Adam, who bought the Departure Lounge from a couple of Swiss chaps who I assume bought it from Susan, decided to rebrand it as ‘The Globe’ he held an auction for the plane models and airline paraphernalia. It all went pretty cheaply as I recall. 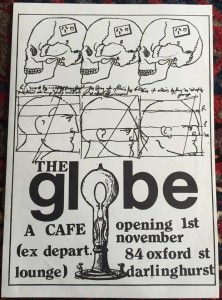 LS: To clarify, the Globe became the Departure Lounge OR is it the other way around.

HB: It was departure lounge first i think. Adem Quinn ran it after & had theatre downstairs.

PM: That’s right. Departure Lounge established and run by two Swiss lads then sold to Adam’s parents with AQ managing. The Crispy Bacon Theatre Co began in the Departure Lounge days then spilled over until the Globe fizzed a year or so later.

HB: Worked in Globe cafe next door. Dungeon’s in both Frenchs & Globe, & probably right along the block. Remember one night at Frenchs down there, it was so smokey you could hardly breath. And god help ya if there was a fire!

HB: Late one night Adam & I watched a bunch of nasty skins hammer this guy in the phone boxes over at post office! They turned their attention to the Globe & i remember running like hell to lock the front door! They smashed on the windows & door, but quickly got bored & went away. I think i had to change my knickers after that.

JS: I remember the globe next door to Frenchs. It had groovy furniture and I remember behind one of the couches was a mannequin that was upside-down, feet in the air. The globe became Bettys soup kitchen.